TEGEV Akreditasyon Sinav ve Belgelendirme Hizmetleri A.S. (TEGEV Accreditation Examination and Certification Services Corporation), which is an associate of Teknolojik Egitimi Gelistirme Vakfi, (briefly, “CbyT”), performs the competence development activities with its all platforms, and introduces the technical work power which is employable, and with high knowledge, skills, attitudes and behavior levels to Turkey.

CbyT obtained its name from the cooperation that makes with Teknolojik Egitimi Gelistirme Vakfi (certified by TEGEV). When TEGEV was established in 1994, it started to its works as a work committee within the body of TEGEV. In 2010, it is considered that CbyT, which continued its works within and cooperation with the body of TEGEV, must have a separate organizational structure, and it was founded as company. On the same year, a contract was signed with Stuttgart IHK (Stuttgart Industry and Commerce Chamber), and it became the only institution that could perform the examination and certification works in Turkey, on behalf of Stuttgart IHK. Since 2013, it carries on its certification works under AHK (German-Turkish Industry and Commerce Chamber). The cooperation works of CbyT with TEGEV continues uninterrupted.

CbyT measures the competence levels of the employees in companies according to the occupational standards in Europe and Turkey, and contributes to the realization of these strategies by the companies in a faster way.

By considering that the intellectual value is in the human source, it establishes the quality assurance system in the company based training, and helps to build the future of the companies on the solid bases.

We can shortly summarize the services of CbyT with this graphics; 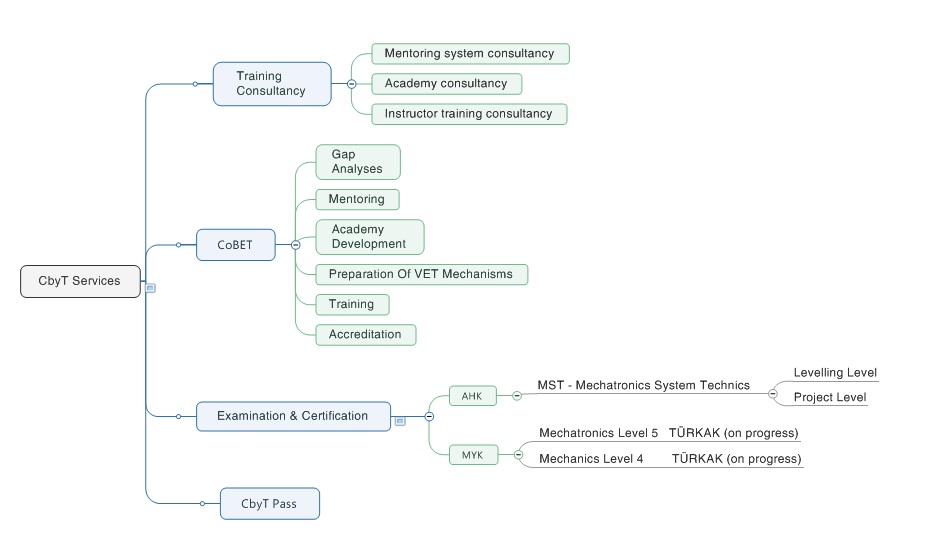